Imbolc is my favorite

Okay, you're right. they're all my favorite.  But Imbolc is different!

No, I really mean it.  Imbolc holds many memories of awesomeness on my path, as does my relationship with Brigid (or Bridhe or whichever other spelling you want.)

When I first embarked on this path, it was because I wanted to be more familiar with the spirituality of my ancestors. my immediate ancestors were varieties of Christian (Evangelical, Catholic, or Methodist) but i wanted to go back further. One branch was Irish and since that was the cool white ethnicity i explored it. The others were varieties of German and English, which in my mind had historical baggage i didn't then want to engage with.

So from the beginning, Bridhe was it.  even when I meandered into heathenry later (having made some peace with that ancestry) and even Vodoun for a bit, she was a constant.  I became a flame keeper (next shift February 11).  I made sure I had a fire pit at my new home, I have three shrines (two indoors and one outdoors). I went to every Bridhe workshop and ritual.  When I was briefly a member of ADF's Brigid special interest group another member made me a stole which I treasure.  I have both a silver and a gold Brigid's cross, and we have a three-armed Brigid's cross over our back door.  I've even worked with her in a possession intensive with Diana Paxson at Sirius Rising a few years ago.

Imbolc is also special because of my connections to community.  My coven officially "convened" for the first time at Imbolc, um...19.....1995 maybe?  We're still mostly together but trying to find time to get together is difficult.

The very first ADF rite I ever attended was Three Cranes Grove's first Imbolc rite (in 2001) and had never felt that connected in a ritual before.  I had found my spiritual home (3CG), and even with all the "challenges" it remains so; the ritual style still speaks to me (and I can definitely envision my ancestors doing something like it).

Alas, this year, it was not to be my year. I seldom miss an Imbolc rite.   The circle didn't seem to be up for one.  And unfortunately, my work schedule changed to Sundays...which means no druid rite.  It had me rather pouty in going to work.

BUT... I managed to sustain the Imbolc vibe anyway.  I listened to my friend Mike's new EP  (which you should all totally download on the way to and from work. It was the perfect length each direction.  I also listened to another grove friend's Imbolc music playlist while at work. So that made me feel connected to my grove and my goddess.  It made me feel less pouty.

Moral of the story: There is often more than one way to honor a high day.  Be creative, be patient, be practical, and just do it.  It's so worth it.

Sunday is for the bringers of light. Many of those who bring the light of knowledge are also healers, so that is also an emphasis here.

You who bring the light of knowledge and healing

Bridhe, fiery arrow and Angus mac Og, the light in the coldest night

Belenos of the starry mantle

Baldr the light that shines in the darkness

Apollo, encourage us to Know Thyself

Lightbringers, I give thanks for the night

And ask your blessings, protection, and wisdom for the day

Posted by Readingsbyleesa at 9:25 PM No comments:

I wasn't sure I was going to make it through my daily devotional work!  So every day, I single out a different "class" of deities to honor. I'm a bit Jungian in my approach. People everywhere face similar challenges, and thus "deify" things that are important to help them meet those challenges. To me, though, this is not the same as a soft polytheism ("All storm gods are one storm god") in that I think they are different spirits. But we all need to worry about health, crops, warfare, death, and other things so we would all have spirits reflecting the other cultural contexts of wherever we are.

Even though my own personal focus is Celtic and Anglo-Saxon, my community honors more than that, and as I sometimes do oracular work, I thought it important to at least have introduced myself in the event that I needed to contact someone from another pantheon.

I chose which spirits based upon the names of the days of the week, which are very similar in both Romance and Germanic languages.  There's a couple of differences though, especially on weekends.  Of course I am starting on the hard part.

In keeping with the Saturday theme of house and yardwork, I am honoring agricultural deities, which is easier said than done as far as narrowing them down!

You who provide the food for our survival

Gods of frith and fellowship, peace and prosperity

Eochaid Bres, who taught the ways of agriculture

Fro Ing, Wooer of Gerdr, Bringer of the Grains

Dionysus and Bacchus, lords of the vine

Producers all, I give thanks for the night

And ask your blessings, protection, and wisdom for the day.

Posted by Readingsbyleesa at 9:19 PM No comments:

Cheating a BIT today, and using my "standard" daily devotional prayers, maybe punching them up a bit.  On most days it's a quick saying of the last two lines (bolded), but if I have time it's the full thing.

Spirits of Rock and Soil

of Leaf and Stem

Of Skin and Blood

Of Light and Shadow

of Hearth and Home

Natures spirits I give thanks for the night

And ask your blessings, protection, and wisdom for the day.

Read more »
Posted by Readingsbyleesa at 10:14 AM No comments:

Really should have started last night, but birthday shenanigans had to be had.

I mentioned before being a flame-tender, and this is my shift (sundown last night). I think I take the flame from Bonnie and then pass it on to Shawneen. My 'mundane' act is to look at the various healing lists and send Reiki their direction.

I actually have two Bridhe shrines in the house.  There's one outside too.

This one probably counts as the "working" one, since it is visible and easy to get to.  This is an older picture, but the first 9-10 months of the Pandemic this is where my pandemic prayer would happen.

Posted by Readingsbyleesa at 9:56 AM No comments:

A few years back, ADF started to develop the idea of "orders."  The idea of orders, I think, was to allow members to explore concepts in more depth. They have study programs, and have to have a clergy member to oversee them (for reasons I still don't fully understand or agree with, but there we are).

Seamus and MJD developed the Order of the Crane. (It may have been the first order approved, in keeping with the grove's ambition at the time. If not, it was second by not much.) One of the requirements of the order is devotional work with Garanus, after a journey to meet him.  I took this work up MAYBE last year, after like 20 years or so of working with Garanus in the grove context.  I've decided Sunday evenings are the day for it.  There's a "canned" devotional in the materials, and I've tried it but ... it doesn't quite "feel" right.  So I'ma do it my way :)

A child of the Earth calls out to Garanus

Master of Land, Sea, and Sky

Inspire me to service to others

Motivate me in service to the Earth

Support me as I do for others

I give thanks for the week that has passed

And ask your blessings, protection, and wisdom for the week yet to come

Read more »
Posted by Readingsbyleesa at 10:02 PM No comments:

Next up on the monthly devotional calendar....Morrighan.

In some ways, she is what started this. I had wanted to figure out a way to honor her monthly as I honored Bridhe.  But what could I "tend" the same way I tended Bridhe's flame?   I had some ....vision? Meditation? Something... where she was standing in front of a cave on a darkened, cloudy, windy night. Trees were bare, but not from the season.

Fast forward to my current 'Four Treasures of Ireland' fixation and voila!  Morrighan (to me) fits here with the Stone of Destiny, with her connection to sovereignty and what not. 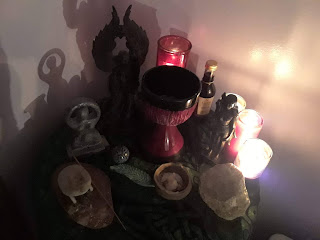 This is the South altar, and due to the focus on the stone (and cave) it's also my Earth altar.  (I know, I know...I've completely fubared the "traditional four quarters!")  Even with the green cloth (which you can't really see), I associate Morrighan with Red.  There's a huge ceramic goblet for her, other candles of  red, white, and black, a couple of figures, a small bottle of red wine.  On the left there's the granite rock that is my symbol of the Stone of Destiny, and in the bottom left there's a clay model of a dolmen I got I think at the Dublin Irish Festival that looks quite cave-like.  There's random other things around it too.

I had been in the habit of doing a free rune reading on my Facebook page. Morrighan's associated with magic and prophecy after all. I need to get back to that.

I call out to the Great Queen

Keeper of the Stone of Destiny,

With awe and respect, I sit and listen

So I may share your gifts with the folk

Morrighan, I honor you.

Posted by Readingsbyleesa at 9:17 PM No comments: